We're working on site updates! Some content may not be available. We appreciate your patience as we work to improve your experience. 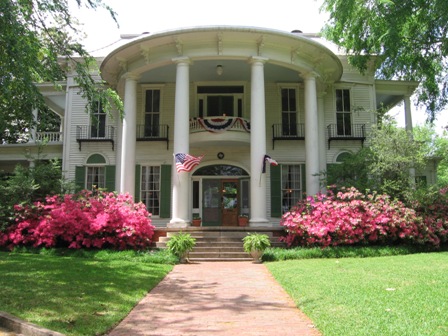 This information was condensed from files at the Tyler Public Library and other sources. Persons interested in the history of the City of Tyler are encouraged to call or visit the library for more information.

Smith County was one of the many counties created by the first Texas Legislature in April of 1846. At that time, an area centrally located in the county and on a hilltop was selected as the county seat. The county seat was named Tyler for President John Tyler, in recognition of his support for admitting Texas to the United States.

A town site was built with five streets running north and south and four streets running east and west and a small courthouse was built on the north side of the public square. An election was held August 8, 1846 to select the first county judge, county clerk, district clerk, sheriff, assessor and collector, treasurer and three-member county commission.

In 1850, the Tyler city government was incorporated and a mayor and four aldermen were named.

Between 1855 and 1858, the first brick stores were built in Tyler. There were five of them, each two stories high. Most of the city's commerce moved by ox-wagon to and from Jefferson and Shreveport. Some cotton and other produce were also carried by flatboats on the Sabine River.

By 1860, Tyler had a population of 1,024. Small industries flourished, including several flour and grist mills, a cabinet shop and factories for making wagons, spinning wheels, guns, hats and furniture.

During the Civil War, Tyler was the site of the largest Confederate ordnance (artillery) plant in Texas, and in 1863 a large Confederate prison camp, known as Camp Ford, was built four miles to the northeast. The camp held as many as 6,000 prisoners and required 1,500 guards in the latter years of the war. Throughout the decade that followed the Civil War, Tyler and Smith County continued with a slow and steady growth in population.

In 1877, the first 21 miles of the Tyler Tap Railroad were completed from Tyler to Ferguson, where it tapped the Texas and Pacific Railway. This helped Tyler become a principal railroad center in the area and precipitated new growth. A public school system was established in 1882. In 1894, Texas College was founded as a Methodist supported college for African Americans. Tyler Electric Light and Power Co. supplied city residents with electricity starting in 1888. By 1890 there were four sawmills, an ice factory, brick and tile kiln, a chair factory, coffin and truck factory, car factory and six canning establishments in the area.

While cotton and corn were main crops in the area, fruit orchards became increasingly important. By 1900 there were more than one million fruit trees, mainly peach, in the county. When a peach blight wiped out much of the fruit industry, many farmers turned to growing roses, which proved ideally suited to the climate and soil of the Tyler area. By the 1920s the rose industry had developed into a major business, and by the 1940s more than half the U.S. supply of rose bushes was grown within ten miles of Tyler. The flourishing rose business gave rise to the Texas Rose Festival in 1933, which has become one of Tyler's major attractions. The festival has been held each year in October, with the exception of the World War II years.

In 1918, the Tyler Chamber of Commerce was incorporated. In 1926, Tyler Junior College organized as an extension of the Tyler Public School system. A separate college district was created in 1945 and the college was moved to its present location in 1948.

Tyler experienced a huge economic boom in the 1930s, when the East Texas oilfield was discovered. Numerous oil companies and field developers established offices in Tyler, and the city emerged as an important regional center for the oil and gas industry. Tylers population mushroomed to 28,279 by 1940.

During World War II Tylers economy received a further boost with the establishment of Camp Fannin just northeast of town. The camp trained thousands of soldiers in infantry skills.

By 1966, even though the petroleum industry still represented the largest actual monetary expenditure, the metal and fabricating industries involved more workers. The city also had extensive railroad and machine shops; manufacturers of woodwork, furniture, clothing, and fertilizer; cottonseed oil mills; and various types of food-processing plants.

Tyler continued to grow and prosper throughout the second half of the 20th Century. Today, Tyler has a population of more than 108,063 and covers 57.16 square miles. The city is considered the manufacturing, health care, educational and retail center of East Texas.

Tyler is a prosperous and growing city, offering big city amenities, while still maintaining its pleasant and friendly small-town charm.